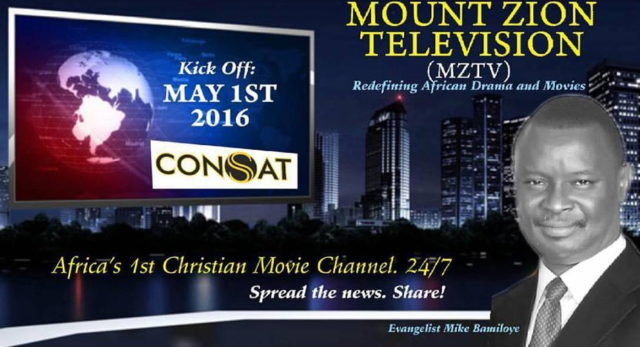 With globally acclaimed film such as Agbara Nla, Mount Zion Faith Ministries said it is fulfilling its calling to propagate the gospel of Jesus Christ to all who need His healing with the of its television channel exclusive to CONSAT.

Speaking on the initiative, Director of Content at CONSAT, Ms. Addy Awofisayo said it took management more than one year to get the deal sealed, adding that the firm is excited to have MZTV on channel 305 as one of its channels.

She said: “We are thrilled to be partnering with Mount Zion Faith Ministries. CONSAT is committed to supporting indigenous content and sourcing fresh and compelling programming for our customers. We are confident that MZTV is going to be delivering just that at high quality. The channel is clearly highly anticipated by Mount Zion fans; so it is a great scoop to

Evangelist Mike Bamiloye of MZTV expressed happiness that the platform will not only allow him to propagate the ministry but also give opportunities to many christian film makers to flourish. According to him, there are so many christina film makers who are in search of platform to express themselves.

He said: “MZTV will be a 24/7 dedicated Christian movie channel. It shall not project any sermons or preaching from churches and organisations nor shall it feature any secular drama and movies from the entertainment circles. It is definitely the pride of the Church of God and the society at large to have a TV channel that puts forth inspiring drama and movies at all times of the day; the first of such channel in Africa and exclusive to CONSAT.”